During May 2009, as a continuation of MIAP's Audiovisual Preservation Exchange (APEX) program, MIAP Associate Professor/Associate Director Mona Jimenez led a trip to Ghana with MIAP alumna Kara Van Malssen (MIAP Class of 2006), and Jennifer Blaylock (MIAP Class of 2010) to develop new forms of collaboration and exchange between the two countries on audiovisual preservation. This was the second trip to Ghana that Prof. Jimenez and Ms. Van Malssen have taken in partnership with the annual Real Life Pan‐African Documentary Festival and the West African Documentary Forum. 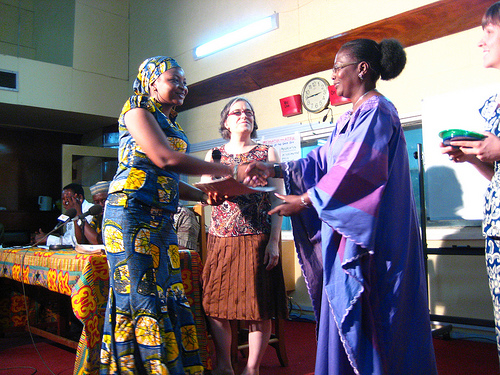 This year's APEX team also included Mick Newnham, Senior Research Scientist at the National Film and Sound Archive of Australia, and Ishumael Zinyengere, Audiovisual Archivist at the United Nations International Criminal Tribunal for Rwanda. The team conducted a weeklong film and video–handling workshop at the Ghana Broadcasting Corporation (GBC) in Accra, Ghana, entitled 'Preserving Our Audiovisual Heritage: Film and Video Collections.' The workshop was jointly sponsored by MIAP, GBC, the Festival, and the Forum.

Workshop participants were 26 archivists, librarians, television editors, and engineers from such diverse organizations as GBC, TV3, Metro TV, TV Africa, Costal TV, and TV Mozambique, as well as the National Film and Television Institute and the Information Services Department (ISD) of Ghana's Ministry of Information. The goal of the workshop was to assist the caretakers of African audiovisual materials to establish archival practices in their organizations, so that they may preserve and provide access to historical films and videos held in their collections. Topics covered in the workshop included collection management, basic care and handling, occupational health and safety, climate control and storage conditions, cataloging, database management, metadata, media reformatting procedures, and preservation ethics.

The participants pledged to work together to network, share information, and build awareness of Ghana's rich audiovisual history – to encourage funding and other support. Practical actions include working together to locate and rehabilitate older playback equipment for video and film. The scarcity of equipment and the lack of private or public labs in Ghana are major obstacles to preservation.

The trainers also developed a greater understanding of the problems facing audiovisual collections in countries like Ghana. Because Ghana is a tropical country with an average temperature of 88degrees F (31degrees C) and a relative humidity that reaches 95% daily, the single most important factor to improve the longevity of the collections is to maintain cool and dry conditions in GhanaÕs film and video vaults; however, this is extremely difficult to achieve. Under tropical conditions, the binder that holds the magnetic particles in place on audio and videotape will degrade, making the tapes unplayable. Acetate–based motion picture film will also disintegrate, releasing toxic vapors in a process known as 'vinegar syndrome.' These changes occur very quickly, and result in the loss of many historic titles each year. Also, the deterioration directly affects the health and wellbeing of the staff charged with collection management, making occupational health and safety an imperative as well.

Following the workshop, the training team consulted with several of the archives and learned first–hand about local methods, providing advice on the first steps for triage of the collections. Mr. Newnham led the team's work to establish Ghana's film conservation lab at ISD, instituting a workflow for inspection and identification as well as new film handling procedures that will ensure the safety and comfort of staff.

Prof. Jimenez, and Ms. Van Malssen have since returned home to the United States, while MIAP student Jennifer Blaylock remains in Ghana working at ISD and GBC until August 4th, fulfilling her MIAP summer internship requirement. ISD's film collection contains government–produced and sponsored films in the form of newsreels, documentaries, instructional films and narrative films dating as far back as the 1950s and the period surrounding Ghana's independence from British colonial rule. Ms. Blaylock will conduct a comprehensive assessment of the ISD collection, which should yield greater clarity regarding its condition as well as the content of the films. Her work will provide greater depth to the already existing documentation, enabling the prioritization of works for preservation and reformatting.

Discussions are underway for a possible collaborative preservation project as a first step to making Ghanaian films available for research, scholarship, education and public programming. Proposals call for preservation to occur in time for the next Real Life Documentary Film Festival in Accra, as well as the Orphan Film Symposium, in Culpeper, Virginia, both to be held in the spring of 2010.

APEX in Ghana was supported by MIAP and the Department of Cinema Studies, the Dean's Discretionary Fund of the Tisch School of the Arts, the NYU Office of Global Programs, and the Rockefeller Archive Center in collaboration with the Association of Moving Image Archivists. Support was also received from the NYU Libraries, Cineric, Colorlab, the Image Permanence Institute, Tuscan Corporation, Urbanski Film, and Walter Forsberg.