From Videodisc to Blu-Ray: Archiving and Conserving Optical Media

Artists have always employed the technologies of their time, and given the current pervasiveness of optical media, it is no surprise that they have become an important tool in the artist's studio practice. Consequently, the preservation of optical media is of increasing concern, not only in terms of the long-term storage of information, but in the preservation of artistic works.

This presentation will start with an overview of the development and functional principles of optical data carriers. Typical damage phenomena as deformation, de-lamination, fading, scratches, micro- and macrobiological attack will be explained and discussed. In addition, the possibilities and limitations of recovery and readability of mechanically damaged and scratched polycarbonate layers will be examined in more detail in small groups. 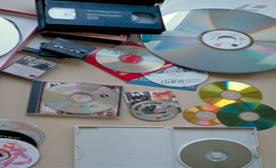 Christine Frohnert was trained as a paintings and sculpture conservator in various Institutions in Germany from 1986-1993. She joined the conservation department of the Museum Ludwig, Cologne, Germany in 1993 and held the position of the chief conservator from 2001-2005. She holds a Diploma (Grade A) in Conservation of Modern Materials and Media from the University of Arts, Berne, Switzerland (2003).

From 2002-2005 she was the deputy head of the modern art section of the German Conservators' Association, VDR, and was a co-organizer of the symposium 'From Setback to Success' held at the Museum Ludwig in 2004. In October 2005, she joined Cranmer Art Conservation in New York City.

This event is by RSVP, with a maximum enrollment of 30. Please RSVP to zlkatz@nyu.edu.